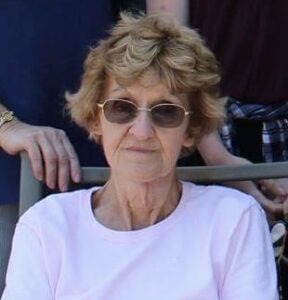 Luane Wilson Waytenick – Former Mayor, City Councilor, and Monroe resident for 75 years passed away on Monday, December 5, 2022. Luane served our community as Monroe City Councilor, Mayor, Event Organizer, Volunteer, and Library Supporter. Luane was born in Hot Springs, South Dakota to Thomas and Thelma Wilson. Shortly after Luane was born the family moved to Coos Bay then settled in Monroe by 1940. After graduating from Monroe High School in 1956, Luane joined the U.S. Army and completed basic training at Fort McClellan, Alabama in 1957. Upon completing basic training, she reported to the U.S. Army Signal Corps at Fort Monmouth in New Jersey. There she met her future husband, Robert Waytenick, who was also serving in the Army. In the 1960s Luane was married and by the end of the decade had five children. During the 1970’s and early 1980’s she raised her family, provided childcare for many local kids, attended classes at LBCC, and in the 1990’s graduated from the University of Oregon and San Diego State University with a Bachelor of Arts in Paralegal Studies.

In the early 1990s, Luane served as City Councilor then was elected as the City of Monroe’s first woman Mayor in 1996. She served a two-year term as Mayor. Her focus, as Mayor, was rebuilding Monroe’s aging infrastructure which included successfully securing a grant for the city’s new million-gallon water tank and a new Revitalization Master Plan with concepts and standards for commercial zoned areas, streetscapes, the City Park, recreational areas, plus creating walking tours and locating potential natural and historic resources. Luane was also a huge proponent of maintaining a positive working relationship between the City, Benton County, and “the ABC gang” (as she used to call all the government agencies that supported Monroe) along with many community members to strengthened the city’s planning and visioning process. In 1997 Cycle Oregon held its tenth annual event with a scheduled stop in Monroe. Luane and Dena Elliot organized this event with city and community support, which was a huge boost to Monroe’s local economy.

At the conclusion of her tenure as Mayor, Luane enjoyed spending time with her family, supporting the current and future Monroe Community Library, and the South Benton Food Pantry. She will always be remembered for being a surrogate mom to so many as well as a supportive neighbor, friend, and mentor. Luane is survived by four daughters and their spouses, one son and his spouse, 9 grandchildren, 4 step grandchildren. The family requests in lieu of flowers, any donations made in Luane’s memory go to the South Benton Food Pantry and the Monroe Community Library Legacy Fund.

Floyd Billings – Former Acting Mayor, Mayor, City Councilor, and Monroe resident for 55 years passed away on Saturday, January 7, 2023. Floyd served our community as Monroe City Councilor, Mayor, Acting Mayor, various City of Monroe Committees, Monroe Little League Coach, MHS Softball Coach, Monroe Booster Club Member, Monroe Area 4-H Club Member, and Donor for many community organizations and city projects. Floyd was committed to Monroe. He wanted to see Monroe remain a community that retains that close knit, neighborly small-town feel. A town where you can go to your neighbor, for anything, or just share the latest catch of the day. Floyd was born in Newberg, Oregon to Frank and Maxine Billings. He attended Creswell Grade School, Cottage Grove High School, and Hoopa Valley High School in Hoopa, California. Since 1968 Floyd was a Monroe resident and with his wife, Sue, they raised a wonderful family. He retired from Hull-Oakes Lumber Company and most recently worked as a Lumber Salesman at Elk Creek Forest Products.

Floyd began his 16 years of service with the City of Monroe as City Councilor (1982-1986; 1996-1998; 2016-2020), elected three times, Monroe’s Mayor (1998-2004), also elected three times, Monroe’s Acting Mayor (2020), plus countless hours on various City Committees over the years including Budget, Parks, Personnel & Finance, and Public Works & Safety. His years of service to Monroe did not stop with him being Mayor and City Councilor. In fact, Floyd also spent 24 years of dedicated service to the future of our community, our children.

From 1977-1983 Floyd served as Monroe Little League Coach and, for 4 years, beginning in 1980, he was the Monroe High School Softball Coach. In addition to his coaching credentials, Floyd held a leadership role with the Monroe Little League as President. He spent many hours volunteering his own time, repeatedly over the years, requesting donations in support of our local community organizations including Monroe Booster Club’s Auction, Monroe Area 4-H Club’s Livestock Auction, and recently Monroe’s City Park Restroom and Covered Picnic Area. Floyd is survived by his wife, two daughters and their spouses, two sons and their spouses, 18 grandchildren, and many great grandchildren. Floyd was preceded in death by his son, Floyd Billings Jr. There will be a celebration of Floyd’s life on Saturday, February 11, 2023 at 1:00 p.m. at the Monroe High School gym. The family requests, in lieu of flowers, any donations made in Floyd’s memory go to the Monroe Rural Fire Protection District and the Monroe Arts Association.

Anthony “Tony” Baker – City Councilor and Monroe resident for over 25 years passed away on Sunday, January 8, 2023. Tony served our community as Monroe City Councilor (1997-2000, 2020-2022). He was re-elected as City Councilor in the November 2022 general election to serve four more years.

Tony was active in the community and was quick to offer his help to anyone that needed it. Tony was born in Eugene, Oregon to Felix “Bob” and Audrey Baker. He graduated from Thurston High School in 1977 followed by one year of schooling at Eugene Bible College with some classes at LCC. In 1979, Tony began work at the City of Cottage Grove as a Dispatcher, and then move on to work for the City of Eugene as a Community Service Officer. On March 15, 1981 Tony married his wife, Delaine. Shortly before their wedding Tony had been hired as a Police Officer for the Eugene Police Department (EPD). He worked a total of 30 years for EPD. His various assignments included Patrol Officer, Undercover Officer, Fatal Accident Investigator, SWAT, Narcotics K-9 Handler, and Tracking K-9 Handler. He served as a Sergeant from 2004 to 2006. He was promoted to the rank of Lieutenant in January 2007. He served in that position until his retirement in June 2009. While working at EPD he continued his schooling, graduating in August 2007, with a Bachelor of Arts in Management from Northwest Christian University.

Shortly after retirement he began work again, as a Security Officer, at the Federal Courthouse in Eugene. He worked for another 10 years before retiring again in 2019. In his off-hours from work and family activities, Tony was busy with remodeling homes, building an RV Park, and working on his 1905 Victorian home in Monroe. Also, he had an entrepreneurial spirit that was always thinking. A car wash? A bowling alley? He always had new ideas. Tony’s latest endeavor was a business called Victorian Pantry that involved freeze drying food.

The past year Tony had been honored by becoming the Executive Pastor at Encounter Church in Elmira. He was humbled by this position and also very excited about all the opportunities he would have to influence other people’s lives. He taught several different classes. Tony was also very active in the recently started building program at the church. He saw these changes as a way to make more room for people to attend church. Tony is survived by his wife, one son and his spouse, three daughters and a spouse, one granddaughter, his mother, and two brothers and their spouses. Also, he is survived by a large extended family and his much loved house cats. There will be a celebration of Tony’s life on Saturday, January 28, 2023 at 11:00 a.m. at Christ’s Center Churchlocated in Junction City. The family requests, in lieu of flowers, any donations made in Tony’s memory go to the Encounter Church in Elmira, Oregon with attention made to the Executive Pastor Tony Baker Building Fund: (www.aplos.com/aws/give/EncounterOpenBibleChurch/general?mibextid=Zxz2cZ)

In December 2022 and January 2023, Monroe lost three exceptional individuals who volunteered, led, and supported our community through multiple decades of combined service. These three individuals also have the unique distinction of serving together on the Monroe City Council from 1996 to 1998. Please read these tributes that honor the memories and accomplishments of Tony Baker, Floyd Billings, and Luane Waytenick.

The City of Monroe is accepting applications for Park Hosts at Monroe City Park. The Park Host provides basic operational services and information to the visiting public in exchange for a full hookup RV site (Electricity, Water, Sewer, and Wi-Fi included) for up to two adult Park Hosts. Click for Application

Join our team – the City of Monroe is hiring for a full-time Accounting Specialist. This position is eligible for Oregon PERS retirement and health insurance. Please read the job description and fill out the job application here.

You are now leaving the City of Monroe Website

The City of Monroe provides links to web sites of other organizations in order to provide visitors with certain information. A link does not constitute an endorsement of content, viewpoint, policies, products or services of that web site. Once you link to another web site not maintained by the City of Monroe, you are subject to the terms and conditions of that web site, including but not limited to its privacy policy.

You will be redirected to